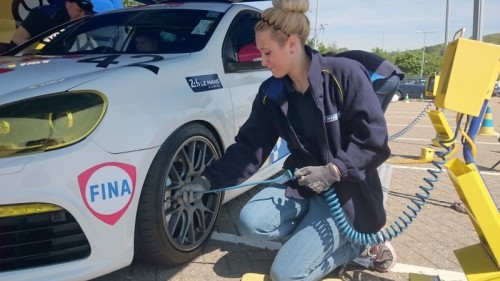 Motorists in the UK are wasting £246* million a year on fuel and putting lives at risk by driving on dangerously underinflated tyres, according to Michelin.

The tyre manufacturer analysed results from more than 23,000 cars in the UK and found that 37 per cent had at least one tyre classed as either “dangerously underinflated” or “very dangerously” underinflated.

The figures come from eight years of Michelin-run events and they suggest attitudes to tyre safety are not improving.

Jamie McWhir, car, van and 4x4 technical manager for Michelin in the UK, said: “The proportion of cars with dangerously underinflated tyres has pretty much stayed the same over the eight years we have been running our Fill Up With Air events.

“That’s pretty depressing when you consider the volume of vehicles and the implications. Seriously underinflated tyres are dangerous, they use more fuel, they wear out quicker and they cause the car to produce more pollutants and greenhouse gases.”

Michelin classifies tyres that are between 7psi and 14psi below the manufacturer’s recommendation as “dangerously underinflated”, while 14 psi or more underinflation is deemed to be “very dangerous.”

Running a car with tyres underinflated by 7psi decreases fuel efficiency by about one mile per gallon. If average fuel consumption is assumed to be 45 miles per gallon on correctly inflated tyres, and average distance driven is 7,900 miles a year, motorists on 7psi underinflated tyres are using on average 18.2 litres of fuel a year unnecessarily.

At an average fuel cost across diesel and unleaded of £1.18 per litre, that means 11.84 million of the UK’s 32 million cars are wasting a total of more than £254 million a year.

In addition, more than 538,000 tonnes of excess CO2 are being emitted by those cars.

Mr McWhir added: “It’s crucial that motorists understand the importance of driving on tyres with the correct pressure, especially as they’re the only point of contact with the road and are therefore critical to the safety of the vehicle, its passengers, other road users and pedestrians.

“Last year the Department for Transport found that dangerous tyres were responsible for more than 40 per cent of vehicle defect related deaths. It is so important to fit tyres of a sufficient quality and then look after them properly.”

Michelin recommends checking tyre pressures – including the spare tyre – at least every month and before every long journey.

Last month industry campaign group TyreSafe and Highways England found that more than 10 million tyres in use on roads in England, Scotland and Wales could be illegal.

Stuart Jackson, TyreSafe chairman, said: “It’s a question of educating motorists to take responsibility for their safety and that of others on the road.

“As vehicles have become increasingly reliable, owners have become less used to performing what were once considered basic precautionary checks before setting off on a journey. Tyres too are much more technologically advanced but they do wear and can get damaged so it is down to the driver to regularly check they're safe

"Awareness among Britain's motorists of the importance of tyre safety urgently needs to improve."

Michelin inspected 23,741 cars over the past eight years as part of its Fill Up With Air roadshow which tours the UK offering free pressure and tyre checks for motorists, as well as tyre maintenance and road safety advice.