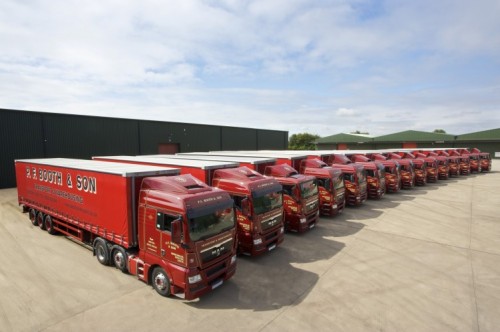 PF Booth & Son recorded run-out mileages of 216,662km for its Michelin steer tyres, which have been removed in accordance with the company’s 3mm tread depth removal policy. This compares with 167,345km for the competitor tyres – an improvement of 29 per cent.

The difference in performance between the two sets of drive axle tyres is even more notable. The truck’s X MultiWay 3D XDE drive axle tyres, which are still running, are projected to complete 279,744km before removal at 3mm. This compares with just 159,324km for the competitor tyres – resulting in an additional 76 per cent tyre life from the Michelin tyres.

“The results were pretty bloomin’ marvellous,” says Dave Booth, Partner at PF Booth & Son. “Seeing the statistics in black and white made the switch to Michelin 315/70 tyres an easy one. You simply get more mileage for your money, as well as the durability, longevity and safety inherent to every Michelin casing.

“The superiority of 315/70 fitments over 295/80 is clear, and switching to this size gives us access to the latest generation of tyres on the market,” adds Booth.

“We have always liked Michelin. I’m a second-generation buyer – my father ran his trucks on Michelin for years,” adds Booth. “So when 315/70 tyres started to be talked about as offering a step-up in performance, we knew we wanted to run a comprehensive trial.”

The Boston, Lincolnshire-based company plans to swap its entire fleet to Michelin 315/70 R 22.5 X MultiWay 3D tyres as wear dictates, and has already specified all new trucks on the fitments as original equipment.

Michelin’s 315/70-series tyres feature a wider nominal section width and lower profile than traditional 295/80 tyres previously favoured in the UK. They provide a greater contact area with the road surface and promote even wear, with a high degree of tyre stability and a lower centre of gravity for improved vehicle handling. What’s more, with an 8,000kg front axle rating, they are also ideally suited for the additional unladen front axle weights imposed by most Euro VI vehicles.

“We have been very pleased with Michelin,” adds Booth. “We didn’t think they would pay us much attention, as we’re a small company. We’ve since found that Michelin is a large company with a small company ethos – they pay attention to detail, and are very precise in everything they do.”

Mill Tyres of Boston will continue to support PF Booth & Son as the road transport company completes its change in tyre policy, ensuring the company’s X MultiWay 3D tyres are always running to their full potential.

Founded in 1953 by Peter Frederick Booth, PF Booth & Son operates a fleet of 15 MAN trucks and 25 Lawrence David tri-axle curtainside trailers from its depot and warehouses in Boston. The company has built its reputation on excellent customer service, and offers a variety of general road transport services, including the transportation of food ingredients and packaging, as well as warehousing.