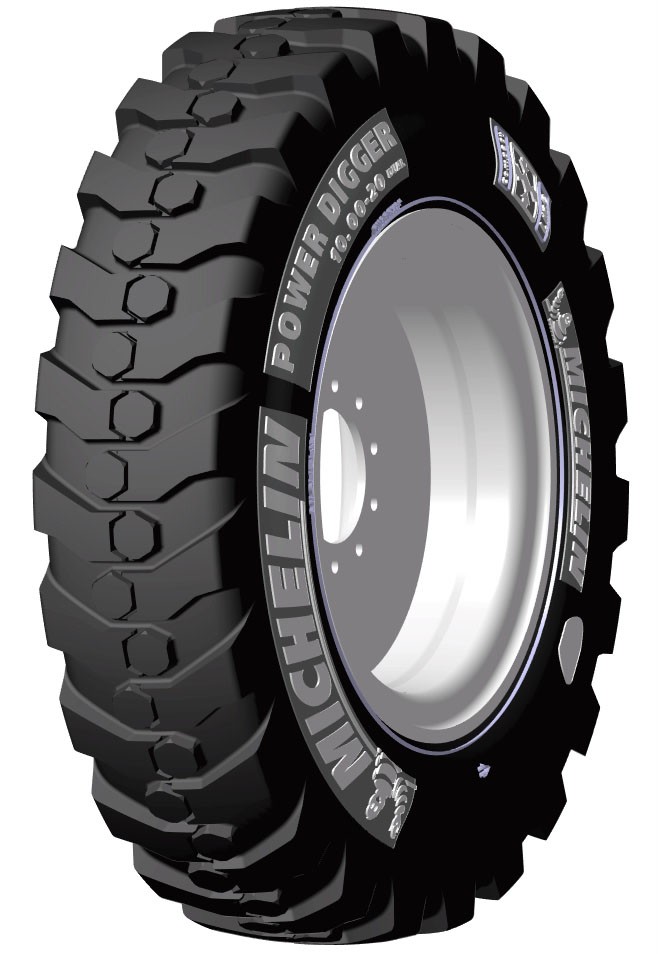 Cuts can be a huge problem on excavator tyres due to the type of work they are required to do. The Power Digger combats this by reducing the surface area of the groove in the centre of the tread – where the rubber is stretched and so most susceptible to cuts and splitting – from an average 15mm on competitor tyres, to 5mm for the Power Digger. An increased number of plies within the sidewall also reduces the strain on each ply, making the tyre more resistant to cuts.

With a sidewall that is 57 per cent thicker than the current market leader, the chances of getting a puncture on a Michelin Power Digger tyre are greatly reduced. The added resistance also stems the general wear normally seen on an excavator tyre.

Safety is also maximised by providing the best possible stability for 360-degree work, thanks to Michelin’s patented diamond-shaped tread pattern, as pioneered in the Michelin BibLoad Hard Surface tyre. These multi-directional tread blocks work from six different angles and feature 12 ridges per block, providing much greater traction for wheeled excavators. When the wheeled excavator’s stabilisers are not in use, the Power Digger’s shoulder lugs also expand to ensure stability.

Wear and tear is addressed with two additional lugs to bring the total to 24 per tyre, creating a greater contact patch with the ground. The distribution of the rubber in the centre of the tread is spread evenly, as this is where the wear is generally most concentrated in cross ply tyres. The Power Digger has a Load Index of 147 compared with the standard 146 in equivalent competitor tyres.

Martyn Pointer, Commercial Director for Michelin’s agricultural division in the UK, Ireland and Nordic markets, comments: “Innovation is what Michelin does. We identify areas where heavy machinery operators are facing issues, and then solve those problems. The Power Digger tyre is the latest example of this, and testament to the more than €700m we invest in research and development every year.

“From the outset our team focused on the four key areas our customers in this sector care most about – safety, cost, damage resistance and lifespan. The net result is the most robust dual-fitment excavator tyre we’ve ever manufactured.”

The Michelin Power Digger tyre is available as both original equipment and on the replacement market.

For more information about the range of Michelin agricultural and Compact Line tyres available visit http://agricultural.michelin.co.uk or tweet @MichelinAgriUK.