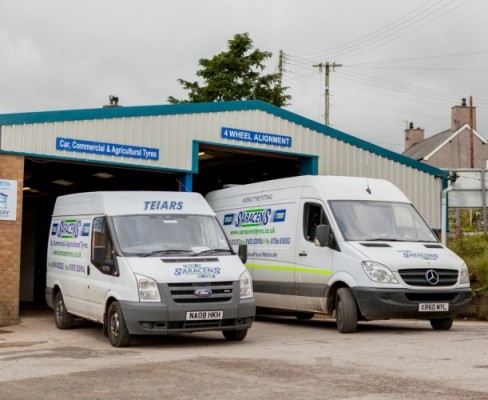 Saracens Tyres has put any plans to celebrate its 50th anniversary on hold to focus its efforts on helping its customers stay fully operational throughout the coronavirus pandemic.

The Michelin Quality Centre-approved dealer is keeping its doors open during the UK’s lockdown period to support key workers in the transport and agricultural industries who are working around the clock to help keep essential supplies, including food, moving.

“We’ve had no choice but to stay open,” says owner Owain Roberts. “We do so much, particularly with the farming community in these parts, that we have to keep going to make sure they can do their vital work. It’s a hugely busy period for them, so it’s a hugely busy time for us.

“We are operating with just half our normal workforce across the depots to ensure we meet the strict social distancing measures. It’s been flat-out at times, but we are absolutely focused on making sure our customers get the service they need.”

Saracens sells, fits and repairs all types of tyres – including car, truck, agricultural and off-highway – for a large customer base across North Wales. “If its black and round, we sell it,” remarks Roberts.

The company has grown substantially since first opening its doors in 1970. From those early days, the family-run dealer now operates four depots – in Pwllheli, Bala, Cerrig and Llangefni.

“The business was originally opened by my uncle, then my father joined six months later. From that one depot, in Cerrig, we’ve built it up over the years,” says Roberts. “In 1979 we opened Bala, six years ago we added the site in Pwllheli and finally took over Llangefni last year. It’s all grown organically really, just through word of mouth and providing a good, reliable service.”

Saracens Tyres was first brought onto the Michelin Automotive Programme (MAP) in 2012, before becoming the first agricultural tyre dealer in North Wales to join Michelin’s Exelagri network, in 2015. Both programmes now operate under the Michelin Quality Centre banner.

“We’ve been selling Michelin since the very beginning,” says Roberts. “To be brought in as part of their approved network of dealers was a major milestone for the company and massively beneficial. As a business, we want to be associated with the best in the field, and that’s exactly what Michelin is – the pinnacle of tyre production.”

Saracens Tyres had planned to hold an open day to mark its half century of successful business a little later in the year, however Roberts concedes that will now probably have to be postponed.

“We were going to have a little celebration, but obviously that looks unlikely now,” he says. “It’s a bit of a shame, but not very important in the grand scheme of things. We’ll just concentrate on keeping our staff safe, and providing as good a service as we can for our customers. All being well we’ll be able to put a little more prominence behind our 51st anniversary celebrations next year!”

Michelin, the leading mobility company, is dedicated to enhancing its clients’ mobility, sustainably; designing and distributing the most suitable tyres, services and solutions for its clients’ needs; providing digital services, maps and guides to help enrich trips and travels and make them unique experiences; and developing high-technology materials that serve a variety of industries. Headquartered in Clermont-Ferrand, France, Michelin is present in 170 countries, has more than 127,000 employees and operates 69 tyre production facilities which together produced around 200 million tyres in 2019. (www.michelin.com)