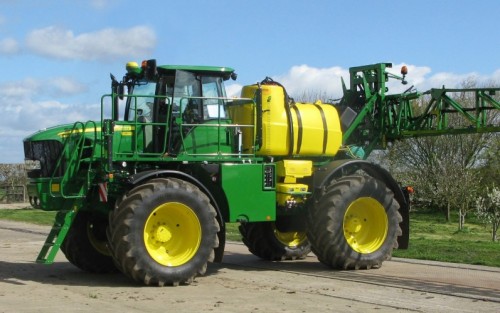 A Leeds-based farmer is reaping the benefits of fitting Michelin’s XeoBib tyres as the specialist fitments have helped him reduce soil compaction.

Peter Trickett, who farms at Fortshot Farm in Wike, has found the lower pressures, at which the tyres run, help distribute the weight of his John Deere 5430i self-propelled sprayer more evenly and over a wider footprint, reducing any negative impact the machine would otherwise have on the ground.

Additionally, after discussions with the Michelin team, Ripon Farm Services which supplied the sprayer, and Anglia Farmers and Tanvic Tyre & Service Centre which supplied the tyres, Trickett is using a wider than standard tyre size – VF710/60 R38. The larger surface area of the tyre has further helped reduce soil compaction.

Further, Trickett was appreciative of the set-up support he received from his local Michelin Account Manager, Ian Whitwell.

Whitwell visited Trickett’s farm to weigh the sprayer, both full and empty with the boom in and out – recommending the lowest tyre pressures which could be used at certain road speeds.

The pressures were increased a little to improve stability on the steep slopes encountered in some of the fields where the sprayer works. The front tyres now run at pressures of 16 psi and the rears at 19 psi to cope with the extra weight of the boom when folded out.

Trickett says: “We are always keen to protect our soil as much as possible, which is difficult when you’ve got a heavy sprayer working the field. We’ve been really impressed with the difference using the Michelin tyres has made. The teams at Michelin and Tanvic Tyre & Service Centre have been so helpful in the decision-making process and we really feel we have the right tyres for the job.”

The technology was revolutionary when it was introduced a decade ago, and is still as relevant today. It was the creation of a Michelin developer who had worked on tyres for the Space Shuttle.

The Ultraflex technology means the tyres can function continuously at low pressures, regardless of speed and are fuel and time efficient because of their low rolling resistance on soft ground, plus enhanced traction. The tyres also offer a more precise and comfortable ride when being driven on the road, thanks to reduced vibrations.

For more information about the farm tyres available from Michelin visit www.michelin-agricultural-tyres.co.uk.