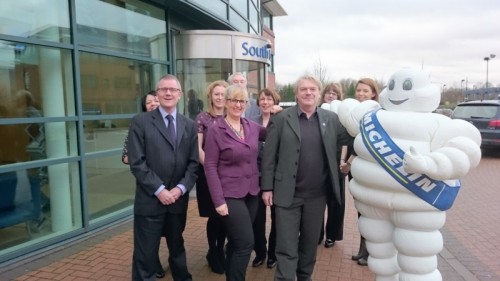 What do bacon baps, bike rides and baking have in common? Well, these are just some of the tactics which have helped employees at Michelin smash their annual fundraising target, to raise a total of £10,682 for local dementia and mental health charity, Approach.

The team at the Stoke-on-Trent based tyre manufacturer had pledged to raise £10,000 throughout 2015 for the charity. But, after a busy 12 months of fundraising – which included team activities such as a staff breakfast club, cycle challenge and a fashion show, alongside individual efforts such as the Approach ‘Walk to Remember’ and the Potteries Marathon in July – they collectively exceeded the target.

The funds raised will be used by Approach to help local residents who suffer from dementia and other mental health issues, through its support programme, which assists people directly affected by these illnesses, as well as their families and carers.

Chief executive of Approach, Will Boyce, said: “We would like to thank all of the staff at Michelin for their support over the last 12 months. Not only have they raised a fantastic amount of money to help those affected by dementia to live as independently as possible; –but they have also worked together with us to help raise awareness of dementia in society today, at a number of practical events.”

Corinne Li, community involvement projects coordinator at Michelin, said: “We are really proud of all of the staff at Michelin who came together over the past 12 months to raise such a fantastic amount of money for Approach. We chose Approach as our charity of the year for 2015 due to the important and invaluable work they carry out in the Stoke area. Dementia and mental health issues could affect any one of us so we’re pleased that our efforts will now go towards helping the team to continue to support those who are affected in some way.”

For more information on Approach and the work the charity carries out, visit: www.approachstaffordshire.co.uk.

Michelin, the leading tyre company, is dedicated to sustainably improving the mobility of goods and people by manufacturing, distributing and marketing tyres for every type of vehicle. It also offers innovative business support services, digital mobility services and publishes travel guides, hotel and restaurant guides, maps and road atlases. Headquartered in Clermont-Ferrand, France, Michelin is present in 170 countries, has 112,300 employees and operates 68 production plants in 17 countries. The Group also has a Technology Centre, responsible for research and development, with operations in Europe, North America and Asia.