Michelin unveils its Pub of the Year 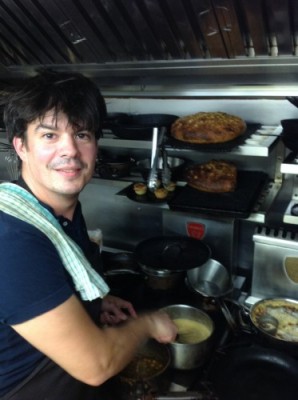 From a selection of nearly 600 pubs across the UK and Ireland, we are delighted to announce that the Pub of the Year 2016 is The Butchers Arms in Eldersfield.

This charming red-brick pub stands on the edge of a small hamlet, 10 miles north of Gloucester. It dates back to the 16C and it hasn’t changed a great deal since. It’s a small place, with space for about 25, and is run by James and Elizabeth Winter – who live above with their three children. The cosy bar draws in the locals and visitors come from far and wide to try the food, which is served amongst low beams and roaring fires.

Rebecca Burr, Editor of the guide said, “When they started out, owners James and Elizabeth’s aim was to open a ‘real’ country pub: a laid-back home-from-home where the locals could come to meet after work and have a good meal – and despite their runaway culinary success, that’s exactly the way it has stayed. The atmosphere is relaxed and friendly and Elizabeth and her sister Louisa are natural hostesses, who welcome one and all with bright smiles.”

James' culinary education began at an early age: his mother is from the Loire and he spent his childhood holidaying in France and visiting the markets, where he developed a terrific appreciation of natural produce. These early influences can be seen in his menus – which evolve constantly throughout the day as new produce arrives – and in his use of whole beasts from nose to tail. Fish arrives every morning from the Cornish day boats, alongside locally shot game in season; and Middle White pork, three-quarter bred Beltex cross lamb and Hereford beef are delivered regularly from nearby farms – you may even find yourself sitting next to the farmer who supplied the meat!

Burr continued, “Unusually, James works alone in the kitchen, and the key to his success is that he isn’t afraid to keep things simple. His cooking is proudly British and classically based but it is also refined, carefully measured and packed with flavour – and he clearly knows how to get the best out of his ingredients, whether its lamb faggots with black pudding or fillet of beef with mini oxtail pie.”

She went on to say, “We first awarded The Butchers Arms a Michelin Star in 2011 and over the years James’ cooking has continued to go from strength to strength. He’s a modest, hardworking young man who knows what he wants and his confidence is backed up by his technical skills. His cooking continues to surprise and delight and I can’t wait for my next visit.”

James Winter, chef and co-owner of The Butchers Arms said: “I’ve been cooking the food I love to eat for the past eight years at The Butchers Arms, so it’s great to hear that other people love it as much as I do. This award is not only incredible recognition for us as an individual pub, but it actually supports and recognises pubs in general across the UK. We couldn’t be more thrilled!”

Michelin unveils its Pub of the Year