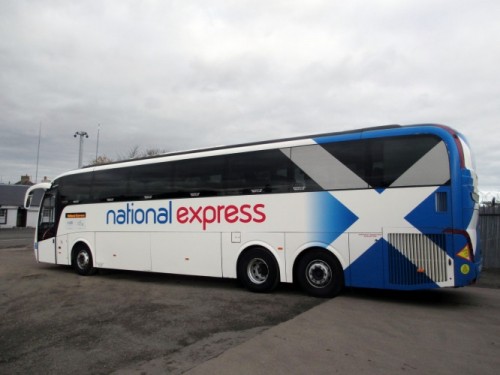 Since moving its National Express route fleet to Michelin tyres, Bruce’s Coaches has seen its drive axle tyres last up to an extra 130,000 km each compared to a competitor brand, before needing to be replaced.

The 14 vehicles collectively cover more than 5.6 million km each year on routes between Scotland and the south of England.

The firm previously specified a premium competitor fitment on its Scania Caetano Levante coaches which would manage an average of 250,000 km, including a regroove, before needing to be replaced.

But following a trial with 315/80 R 22.5 Michelin X MultiWay 3D XZE tyres, on the same vehicles and routes, the Salsburgh-based company saw a return of 380,000 km including a regroove – an improvement that has been maintained since moving the entire fleet to Michelins.

John Bruce Senior, Director at Bruce’s Coaches, says: “This level of mileage speaks volumes in terms of the quality Michelin is able to provide. For us, tyres are a huge expense. It’s advantageous for us to run Michelin versus its competitors, as we get a more efficient, and economical set of tyres.

“Our coaches are also on a demanding schedule and safety is paramount, so we want the fleet to complete their day’s work without any problems or punctures. We’ve never had any issues with Michelin and we’re confident our fleet is running on the best rubber.”

The Michelin X Multiway 3D XZE tyres offer a blend of fuel efficiency and mileage performance, with 3PMSF (Three Peak Mountain Snowflake) markings which are testament to the tyre’s high level of grip in all-weather conditions, helping Bruce’s Coaches keep to schedule whatever the weather.

Bruce’s Coaches is an independent family-run business, established in 1982. It specialises in high mileage contract work, operating throughout the UK.