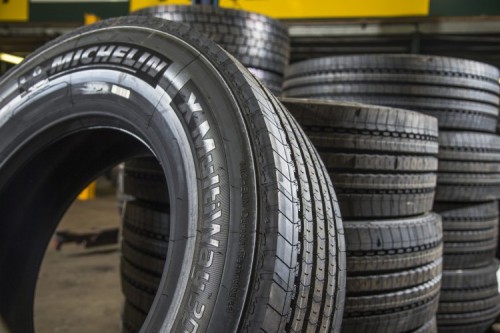 Quality food producer Samworth Brothers – owner of the famous Ginsters pasty brand – has reaffirmed its commitment to running a predominantly Michelin-shod fleet after pitting its Michelin tyres against another premium brand in a year-long trial.

The results showed the Michelin ‘regional’ tread pattern tyres to be 1.19 per cent more fuel efficient than the competitor’s regional tyres – amounting to a significant saving for the business. At the same time, CO2 emissions are reduced by approximately 252 tonnes annually across the fleet – further reducing the firm’s carbon footprint.

The trial compared the performance of a set of 315/70 R 22.5 Michelin X MultiWay 3D XZE all-position and XDE drive tyres against a premium competitor, both fitted to identical MAN TGX 6x2 tractor units.

“It was staggering to see how much fuel can be saved by fitting Michelin tyres. The test confirmed that when it comes to tyres, you get what you pay for,” says Ian Cooper, Vehicle Maintenance Unit Manager at Samworth Brothers’ Leicester depot.

The trial also demonstrated that a Michelin policy means Samworth Brothers buys 55 fewer steer axle tyres and 69 fewer drive axle tyres per year than it would if running the competitor policy. The Michelin fitments’ projected run-out mileage was more than 60,000km greater than the competitor tyres.

The fleet operates intensively, 24/7, on a double-shift basis. Each vehicle clocks up to 250,000km per year whilst transporting chilled products to regional distribution centres, with depots in Bristol, Callington, Leicester and Penrith.

Samworth Brothers is part of the Samworth Brothers group, which was established in 1896 and is made up of 19 businesses, employing 8,000 people. The company was named Temperature Controlled Operator of the Year at the 2016 Motor Transport Awards.