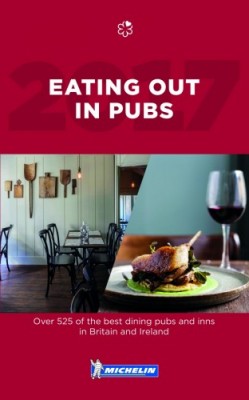 This year’s Michelin Eating Out In Pubs Guide recommends more than 500 pubs, of which 38 are new entries.

The Michelin Eating Out In Pubs Guide recommends pubs and inns from all over Great Britain and Ireland. Some of the pubs are hugely characterful and have been providing sustenance for centuries; others sport smart modern looks and serve global menus.

Rebecca Burr, editor of the Michelin Eating Out In Pubs Guide 2017, said: “The pubs in our guide could be in a city, by the sea, in a village or at the top of a mountain. But one thing they all have in common is that they have been chosen by our full-time team of anonymous inspectors for the high standard of their cooking.

“We are increasingly witnessing how pubs can provide a platform for young chefs to start their own businesses, and how inventive these chefs can be, particularly when it comes to the sourcing of their ingredients. The quality of cooking in some of these pubs certainly rivals that of restaurants.”

In this year’s guide, two pubs have been awarded a Michelin Star. These are The Wild Rabbit in Kingham, with Tim Allen in the kitchen, and the Crown at Burchetts Green, run by Simon Bonwick and his family.

Burr said: “The Bonwicks put their heart and soul into running the Crown, and that passion really shines through on the plate.”

Talented chefs are also showing their resourcefulness in keeping costs down, and this year eight pubs have been newly awarded the Bib Gourmand for good value, good quality cooking. One of these – The Marksman in Bethnal Green – is also the recipient of the 2017 Michelin Pub of the Year award.

Burr added: “One of the things that we like about the Marksman is that it’s a proper pub first and foremost. As such, it’s a relaxed, traditional place to come for a pint of local ale – as well as offering gutsy British dishes made from top-notch produce.”

Every entry in the guide features colour photographs and an in-depth description, as well as prices, directions, regional maps and indexes by both pub and town name. Pubs with accommodation are highlighted, as are those offering something extra special – known as Inspectors’ Favourites.

The full list of pubs in the guide, along with a cover image and a picture of the Pub of the Year can be downloaded at: www.travel.michelin.co.uk

With the MICHELIN Guide, the Michelin Group continues to help millions of travellers. The Group has also adopted the mission the Guide gave itself when it was launched in 1900: "avancer ensemble" - moving forward together.