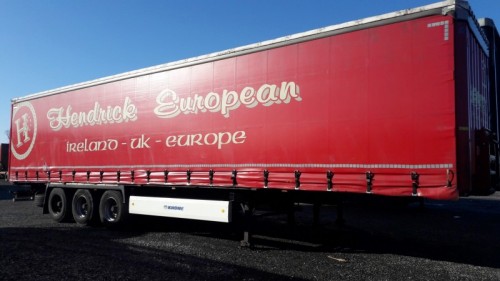 The trial began when the Dublin-based company took delivery of four new Krone Euroliner trailers, each fitted with a different brand of 385/65 R22.5 original equipment tyres – including X Multi T tyres on the Michelin-shod trailer.

All four trailers entered into service at the same time and completed similar journeys, in terms of distance and demand. After 12 weeks, Hendrick European began checking the wear on the four sets – noting that the Michelin fitments’ wear slowed significantly after an initial running-in period, unlike the competitor brands that continued to lose tread.

The tyres were rotated around the trailer axles to maximise life, and the three sets of competitor tyres were all removed at around 70,000km, with less than 3mm of tread remaining. In stark contrast, the X Multi Ts were removed after 140,000km with approximately 4mm remaining, at which point they were re-grooved - adding a further 3mm of tread depth and 25,000km to the life of the tyres.

Paul Hendrick, Workshop Manager and Company Director at Hendrick European, says: “We had never specified Michelin tyres before, but we knew a number of our competitors did so we wanted to see what we were missing out on. It’s fair to say we were very surprised by the drastic results, particularly given we were comparing four top brands all offered as original equipment.

“Our trailers are always on the road and each one can travel up to 100,000km a year. Now that we know what Michelin tyres are capable of we feel confident that when we specify Michelin tyres again, we will reap the benefits.”

The X Multi T offers excellent longitudinal grip and lateral grip on dry and wet surfaces due to its innovative tread design. They also deliver around 10 per cent more mileage than the previous generation Michelin XTE3 trailer tyres.

Hendrick European operates a fleet of 50 tractor units and more than 90 trailers. The family-run haulage company has been in business since the early 1970s, providing freight, transport and logistics services throughout Ireland, the UK and Europe.