Michelin has been at the heart of the Potteries community yet again in 2014, with staff from the tyre manufacturer’s Campbell Road office supporting eight local regeneration projects over the course of the year.

Teams from Michelin’s management, finance, purchasing, personnel and communications departments, along with the truck tyre team – some 74 people in total - joined forces to volunteer their time to undertake a host of decorating and gardening projects throughout the summer and autumn. 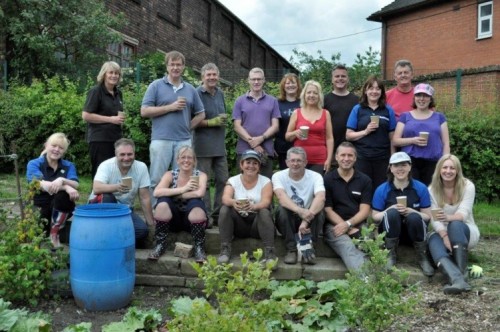 The organisations that benefitted from the many man-hours invested by Michelin staff in 2014 included The Prince’s Charities’ waterway regeneration which saw a team from finance stencil the canalside wall running between the Middleport Pottery factory and Westport Lake. The three-day project took inspiration from the iconic Burleigh pottery and was designed to inject colour and life into the waterway stretch to help attract more tourists to that part of Burslem.

For the personnel and communications teams, it was a case of taking on green-fingered initiatives; a hardy squad from personnel supported The Prince’s Trust’s Root ‘n’ Fruit project by creating a community garden on a derelict plot of land in Burslem to allow local children to learn about growing fruit and veg. Surplus food grown on the site will be given to local food banks.

The communications team rolled up their sleeves for some serious weeding and trimming at the Stoke West & Oakhill Community Association’s Boothen Garden on London Road – to restore the community garden which is well used by young and old.

“Working together on initiatives like this also unites our staff, and employees often talk about the pride and fulfilment they take away from being able to give something back to the areas in which they live and work.”

To register your interest for community support from Michelin in 2015, contact corinne.li@uk.michelin.com.