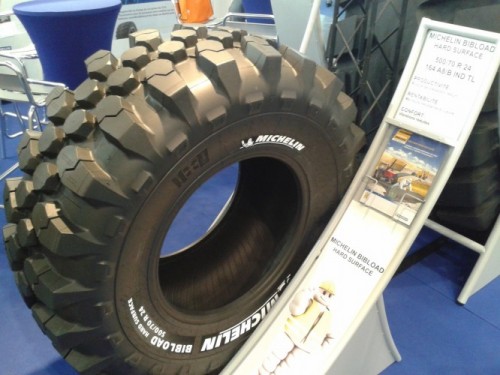 Michelin has extended its range of BibLoad Hard Surface tyres, unveiled last year, to include a new size popular on telehandlers used by farmers across the UK and Ireland: the 500/70 R24.

The new tyre has been specially designed for working on hard surfaces, whether dry, wet or greasy, with a tread made up of unique, diamond-shaped tread blocks, building on the supreme robustness of the previous generation Michelin XMCL tyre.

“The net result is a product with unmatched performance on the market, providing better traction, stability, comfort, damage resistance and a longer service life than the XMCL it replaces. It’s a natural result of Michelin consistently spending more than €600 million on research and development every year.”

The diamond-shaped tread blocks ensure that whatever the direction of the machine, the tread block is always in the right position for working efficiently. Alongside it, the new lug tread pattern makes it possible to evacuate quickly any debris that may have got caught in the tread grooves, whilst also providing greater transverse adherence on slippery ground.

With the launch of this new tyre, Michelin has further improved damage resistance, with new features including enhanced sidewall protection and a wheel rim stone guard preventing damage to the edges of the rims when working on difficult terrain.

Tyre life is also extended by increasing the surface area of the tyre in contact with the ground to 44 per cent, from 29 per cent for the equivalent size XMCL tyre. The new diamond-shaped tread blocks and shoulder blocks also provide increased rigidity to the tread in the event of lateral forces being applied, improving resistance to wear-and-tear.

This increased rigidity also delivers greater operator comfort because for each revolution of the wheel, 24 tread blocks on each side of the tyre and 48 in the centre – making 96 tread blocks in total – come into contact with the ground in an offset fashion, rather than simultaneously. This helps to reduce vibrations and noise, particularly at high speed.

At the same time, Michelin is also extending its BibLoad Hard Surface tyres to include the 400/70 R20, ideally suited to compact loaders and backhoe loaders.

For more information about the range of Michelin farm tyres available visit www.michelin-agricultural-tyres.co.uk.