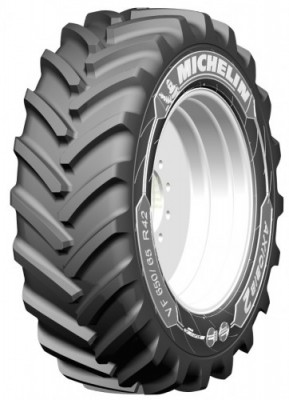 Michelin has chosen the LAMMA Show 2017 to host an exclusive UK preview of its all-new AxioBib 2 tyre range, showcasing the new agricultural tyre to farmers and contractors a month ahead of its planned international debut.

The new tyre range will initially be available in two dimensions, Very High Flexion (VF) 650/65 R42 and VF 540/65 R30, and has been designed to meet the rising trend for tyres that can carry large loads at lower pressures. Designed for 160hp to 320hp tractors, AxioBib 2 enables Michelin to offer a patented Ultraflex technology tyre for all high-horsepower tractors – bridging the gap between the proven XeoBib (120hp – 180hp) and AxioBib (300+hp) ranges.

Gordon Brookes, Michelin’s Customer Engineering Support Manager, says: “AxioBib 2 stands out for its VF rating and 650mm section width, which we expect will make it a firm favourite for ploughing. Farmers also tell us they prefer a 42” rim over 38” variants, meaning this tyre should hit the sweet-spot for many.”

Each VF 650/65 R42 AxioBib 2 tyre is also capable of carrying an extra 2,450kg at 65kph than the same size of MultiBib, making it particularly desirable given the increasing weight of new farm machinery, and can operate at up to 70kph. The tyres will also stand out for their Narrow Rim Option (NRO) markings on the sidewall, which confirm their higher load capacity without the need for farmers to upgrade to wider wheel rims.

The AxioBib 2 tyres will be available to see throughout the LAMMA Show at the East of England Showground (18-19 January 2017) on Michelin stand G33.