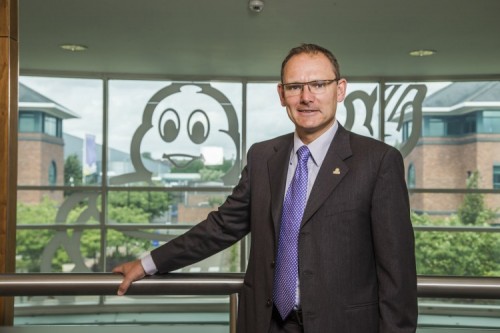 Michelin Tyre plc has appointed Guy Heywood, 48, as Commercial Director of its operations in the UK and Republic of Ireland. He retains his position as head of Michelin’s truck and bus division, which he has held since 2012.

The expanded role will see Heywood join the senior leadership team of Michelin Tyre plc and he will represent the company commercially in the UK and Ireland. He will also co-ordinate with Directors of each Michelin product line, including agriculture, earthmover, motorcycle and passenger car, to represent the commercial side of the business at Michelin’s headquarters in Clermont-Ferrand, France. In addition, Heywood will oversee relationships with some of the largest customers in the UK and Ireland, which utilise a broad range of Michelin products.

Commenting on his new position, Heywood says: “I’m delighted to have the opportunity to work closely with teams across the business. From passenger car to earthmover, each division within Michelin is widely recognised as being the premium brand of choice in its sector, delivering what we call ‘total performance’ to our customers.

Looking to the future, he adds: “Michelin has been a major player in the UK since opening its first office in London 110 years ago; I’m looking forward to helping steer the company’s continued growth and development in this key market.”

As well as his roles within Michelin, Heywood is also a Director of the Low Carbon Vehicle Partnership and an Ambassador for Transaid, the official charity of the road transport and logistics industry.

Heywood is married with two children and will continue to be based at Michelin’s UK head office in Stoke-on-Trent.