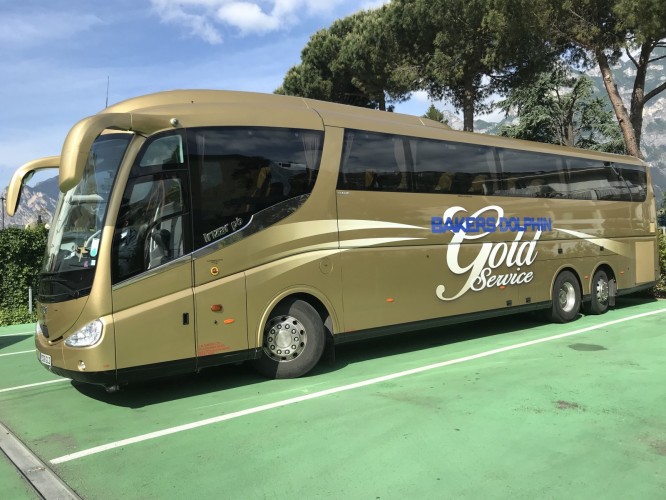 Bakers Dolphin Coach Travel – one of the longest established independent coach companies in the South West – is on target to make significant savings to its annual tyre bill, after a trial which pitched a full set of Michelin tyres against fitments from three competitors.

Based in Weston-super-Mare, Bakers Dolphin has been trialling Michelin’s 315/80 R22.5 X Multiway 3D XZE tyres on a Scania Irizar coach, against tyres from three competitor brands on identical vehicles. At more than 50 per cent worn, tread depth readings project the Michelins are on target to deliver more than twice the longevity of the closest performing competitor set, and more than three times the performance of another major brand.

Mark Vearncombe, Chief Engineer at Bakers Dolphin, says: “Naturally, we tend to be sceptical when someone comes to us claiming they can reduce our tyre bill, but given Michelin’s reputation as a major global brand we wanted to see what was possible.

“So far it has been an eye-opening experience for us. In such a short space of time, the difference we’ve seen has been exceptional. When fitted across our fleet, the Michelin tyres could deliver tangible savings in our running costs and massively reduce the number of tyres we fit, which is better for the environment too.”

Detailed reporting has shown that with Michelin tyres fitted, the company would need to purchase just 107 new steer tyres per year to keep its fleet on the road, versus 252 or 320 for the two competitor brands in the trial – an over payment of 44 per cent and 118 per cent respectively, based on tyre performance. On the drive axle, Bakers Dolphin would require just 51 new Michelin tyres per year for its fleet, versus 131 of the competitor’s tyres – an overpayment of 30 per cent annually.

“Given the high-mileage nature of our work, tyres are a significant yearly expense. This trial has shown how we can potentially unlock huge savings, and we’ll be reconsidering our tyre policy moving forward.”

The coach company has a mixed fleet of more than 70 vehicles, ranging from Volvo, Scania, and Mercedes-Benz units, operating every day of the year.

Bakers Dolphin Coach Travel has been in operation since 1889 and specialises in coach services and premier Continental and UK holiday tour experiences. It won two awards at the British Coach Tourism Awards 2018 – Coach Driver of the Year and Coach Tour Operator of the Year for Large Fleets.