Five years on the job for long-lasting Michelin trailer tyres 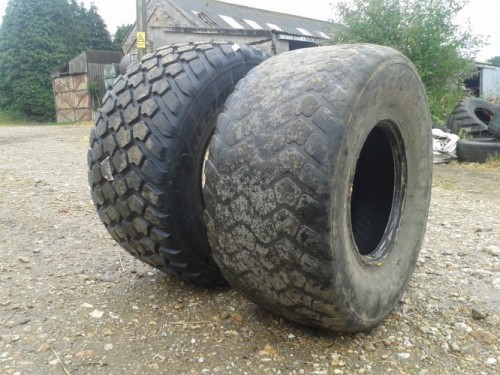 A Dorset-based agricultural contractor has replaced its Michelin CargoXBib tyres like-for-like after achieving exceptional wear from the fitments over a five year period.

Bernard Cox Ltd, which undertakes a number of arable and grassland contracts for customers in the Dorchester area, specified the CargoXBib 560/60 R 22.5s as original equipment on a fleet of new trailers after the company had heard good things about the product.

The tyres are only now being replaced as the tread has worn sufficiently due to the intensive work they have undertaken.

Owner, Bernard Cox, says: “When we were deciding which tyres to fit to the trailers we spoke to a lot of other contractors and they all said the Michelin CargoXBibs were better than any other tyre, due to the fact they last longer and are incredibly durable.

“We’ve been impressed with how many years of service we’ve had out of the rubber and didn’t hesitate about replacing the worn tyres with exactly the same again. Michelins cost a little more upfront, but when you think of the life you get out of the tyres and the added benefits – they more than pay for themselves.”

The trailers are used primarily for grass silage, grain harvest and maize silage, so operate intensively between April and November, functioning at maximum capacity.

The CargoXBib tyres are ideal for applications such as Bernard Cox’s where the equipment is used extensively at low pressures to help reduce soil compaction, thereby increasing soil protection and preserving its customers’ yield rates and productivity.

The low rolling resistance of the tyres allows operators to keep an eye on fuel bills as the less tractive effort used means less fuel is consumed.

Michelin, the leading tyre company, is dedicated to sustainably improving the mobility of goods and people by manufacturing and marketing tyres for every type of vehicle, including airplanes, automobiles, bicycles/motorcycles, earthmovers, farm equipment and trucks. It also offers electronic mobility support services on ViaMichelin.com and publishes travel guides, hotel and restaurant guides, maps and road atlases. Headquartered in Clermont-Ferrand, France, Michelin is present in more than 170 countries, has 111,200 employees and operates 67 production plants in 17 different countries. The Group has a Technology Centre in charge of research and development with operations in Europe, North America and Asia. (www.michelin.com)

Five years on the job for long-lasting Michelin trailer tyres