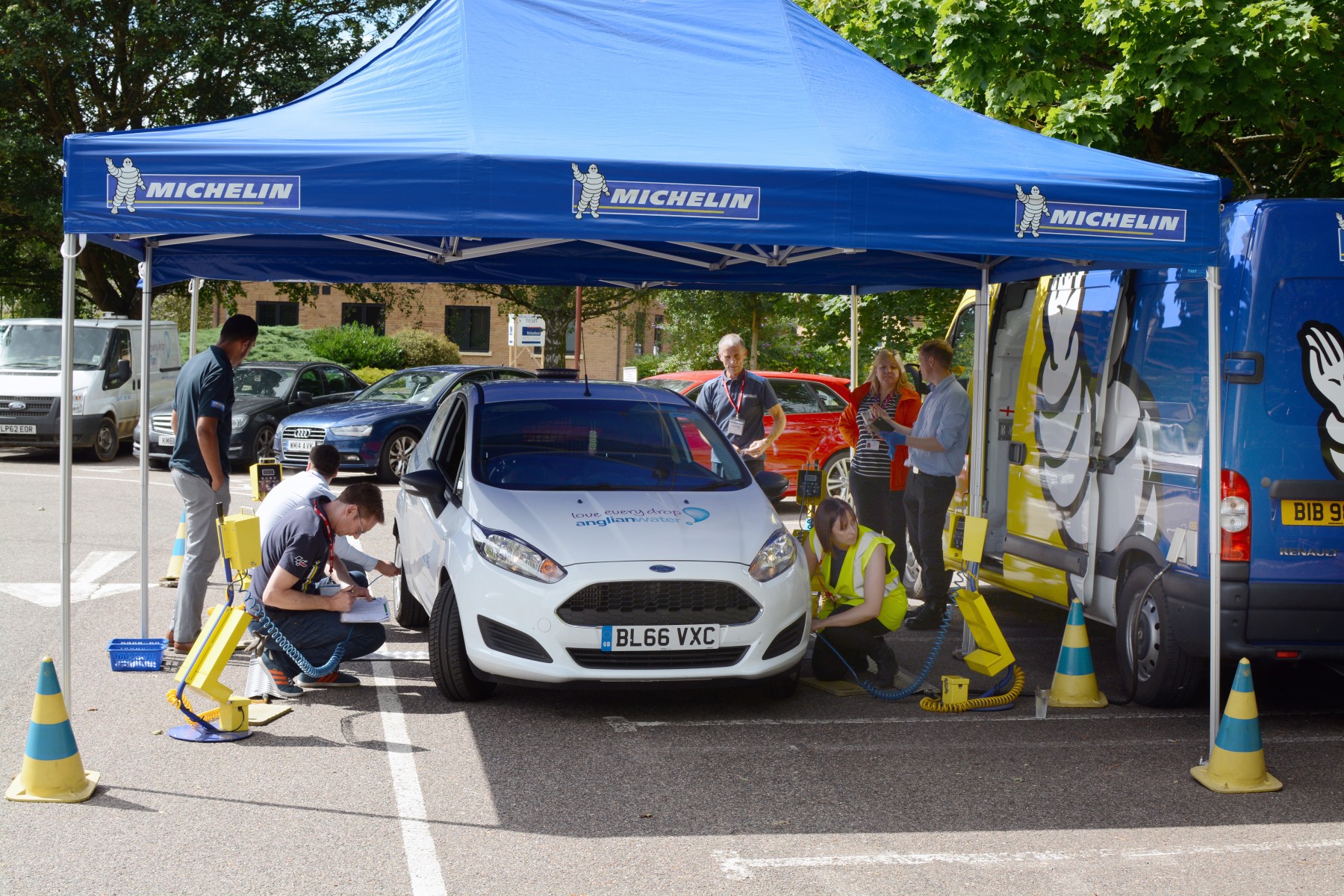 Anglian Water is reaping the benefits of Michelin’s ‘Fill Up With Air’ tyre safety campaign, registering its best ever performance at the annual pressure check event.

Since 2011, staff at the utilities company have undergone voluntary tyre inflation tests at various business premises – and, most notably this year, 63 per cent are driving cars and vans running on four correctly inflated tyres (up to 3 psi under-inflation), versus 41 per cent in 2016.

Factor in cars where pressures were judged to be within an acceptable threshold (4-7psi under-inflated), and that figure jumps to 83 per cent – compared with 75 per cent in 2016.

Around 120 vehicles at Anglian’s Peterborough office were tested during the 2017 round of Michelin’s successful roadshow – and the rates of inflation were superior across the board.

Ian Ruby, Key Account Manager at Michelin, says: “Anglian Water is pointing the way forward with these results. Not only are staff driving in much safer conditions, they’re also saving money on fuel and tyre replacements, and contributing to significant annual falls in carbon emissions – so a correctly inflated set of tyres is a win-win all round.

“The beauty of our ongoing Fill Up With Air project is that it costs companies nothing to be involved, but is paying dividends in the long run.”

David Leggett, Fleet Operations Manager at Anglian Water, explains: “Michelin has been fundamental in encouraging a greater focus on tyre safety across our organisation, and the proof of their efforts is visible every year when we take part in Fill Up With Air.

“Without doubt, our company fleet and the private cars our colleagues drive to work are safer and more efficient thanks to Michelin.”

At the inaugural Fill Up With Air event with Anglian Water in 2011, only 31 per cent of staff had a set of tyres with correct pressures – which is less than half the number recorded this year.

Also in 2011, 34 per cent of Anglian workers were running on at least one tyre deemed ‘dangerous’ (8psi to 14 psi under-inflated) or ‘very dangerous’ (16 psi or more). Fast-forward six years, and just eight per cent fell into the same categories.

Year-on-year, Anglian’s performance at the Fill Up With Air checks has improved, proving Michelin’s tyre safety message is being well received by the water company’s 4,000 employees.

That means a far greater number of tyres fitted to Anglian’s fleet of vehicles and staff’s privately-owned cars are now projected to be lasting their full life, whilst also saving significant amounts of fuel by optimising each tyre’s rolling resistance.

Key to the success of this project has been the delivery of a training module by Michelin, for use by managers at all levels to educate staff about the impact tyre pressures have on the environment, fuel efficiency and tyre life. Michelin has also provided tyre inflation posters to display in Anglian Water’s offices and workshops, as well as content for its intranet.